Lounge Downstairs - view to the lawn

Relax in the downstairs lounge room - No internal access

House from the lawn

Main Magic is a classic Kiwi Holiday home. Main Magic is a 4 bedroom plus rumpus room, 2 bathroom Tairua holiday home. Enjoy the peaceful outlook and relax... This is an excellent base for a family escape! The location of Main Magic is perfect, a 1 minute stroll to the shops, and easy walking access to the playground and beach. Ocean beach is about a 15 minute flat walk, or a short 2 minute drive.

This 2 storey Tairua holiday home with external access to the lower floor only, includes modern open plan living upstairs. Set yourself up on the deck for the afternoon sun and great views of the estuary! The downstairs living room has been recently updated providing excellent access to the new lower deck and back lawn.

Downstairs, the rumpus has its own access, and provides additional space for your group to relax. The rumpus room includes twin single beds that can be joined to form a king sized. Bedroom 4 downstairs is fitted with 1 single bunk set and 1 double bunk set. There is also a port-a-cot available when required. This is a great set up for an extended family group!

There is a renovated bathroom upstairs. Downstairs bathroom is more basic. The house comes with TV and Freeview, Blue Ray, Wi-Fi for email and web access (no streaming please), a Playstation3, and separate TV for the games system. A fully stocked kitchen (utensils, cups, plates/bowls, wine glasses, pots/pans, cutting boards, mixing bowls, Nespresso coffee maker, blender, toaster, knife set, we got you covered!) along with a BBQ makes cooking and entertaining a breeze.

Tairua is a fantastic coastal location in its own right. In addition, Tairua is close to Hot Water Beach, Cooks Beach, Cathedral Cove and a drive to Whitianga, Thames, Whangamata and Pauanui. There are plenty of activities in the town including golf (one set of clubs provided at the house), walking, fishing, swimming, kayaking.

The backyard at this Tairua holiday home is a perfect size to kick a ball round.

Everything you need for a comfortable beach holiday awaits... Welcome to Main Magic in Tairua!

Please note that the sleepout/rumpus and bedroom downstairs can only accessed externally and they're not connected internally with the rest of the property.

No smoking inside or outside at this property.

When we arrived, the lock box was not in the location that was stated on the email with the key lock box information, once we finally found the lockbox, we were not told that that the code had been changed from what we were given, we had to ring bachcare who were very apologetic for the inconvenience. We were a little upset that we needed to clean when we arrived. The floors were so dirty that our feet and socks were black from walking around, there was rubbish and bottles under some of the beds, and there was not enough bedding on the beds that we needed to use for the 9 people that we had. The downstairs bedding smelt musty like the whole downstairs area, so we needed to air the room and wash the bedding. We were also disappointed that we were only given one towel each for the 3 days that we were booked in for. The blind winder down stairs and in the end room was broken which was a pain to wind the blind up or down, and there were holes in the downstairs toilet wall. We also had food ruined from the thousands of ants. Other than these things, this house is in a perfect location. The heaters were great during the cold evenings and the house is perfect for a family. If the house was atleast clean, I would've definitely re book in the future.

Very disappointed with Bachcare !! Left message to ring re the issues we had re no hot water. No one rung, left night early.

Thanks for your review, Tracey. We are very sorry to hear about the hot water issue. We have since spoken to the local team and we will ensure that instructions are left at the property in the future.

Good location, good place to stay, close to the shops and restaurants

Central for ease of access to cafes, shops etc and near swing park and shallow water for young children.

Main Magic has a great location for those who want to be very close to the shops rather than beach. Note that this is very much a std bach level accommodation, not a higher quality beach house. Bedrooms are small, the bathroom is basic with very cracked vinyl tiles and the beds are of basic level. Kitchen fittings are a bit warped, and the pots and pans in poor state. There is a nice outdoor table and chairs downstairs though the stools were a bit rickety so you had to be careful sitting. Lounge furniture is pretty comfortable and the view from the small deck is pleasant looking over the houses across the estuary to the hills. Nice to have a filtered water tap in the kitchen. Place was not particularly clean although the beds and duvets were.

Thanks for your review Judith. At Bachcare we pride ourselves on our properties being sparkling clean, and we're sorry your experience did not meet our usual high standards. We've passed on your valuable feedback to the property owner for review. We're glad you loved the location of Main Magic and we hope to welcome you back again in the future!

Fantastic location to the shops and handy to beach. Lovely view of estuary. Great for large group.

Such a great house !! Awesome location and extremely comfortable . Had everything that you could need . Will definitely be keen to stay there again

An excellent bach for a large group. Very handy to all facilities and amenities. 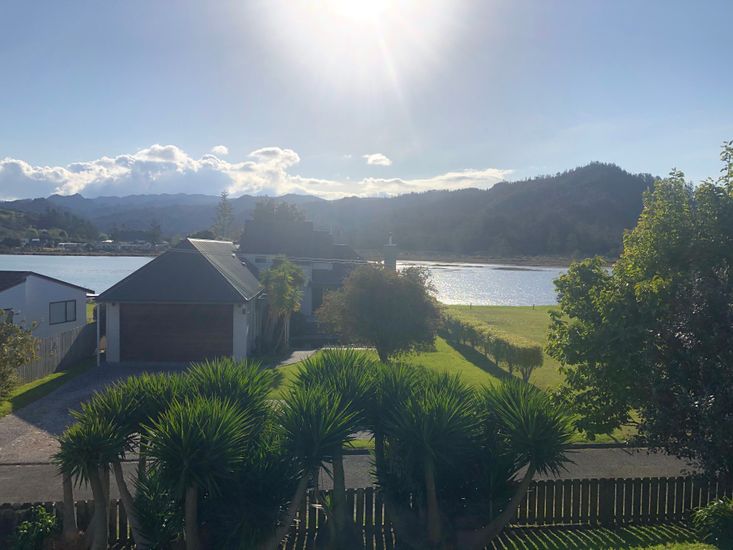 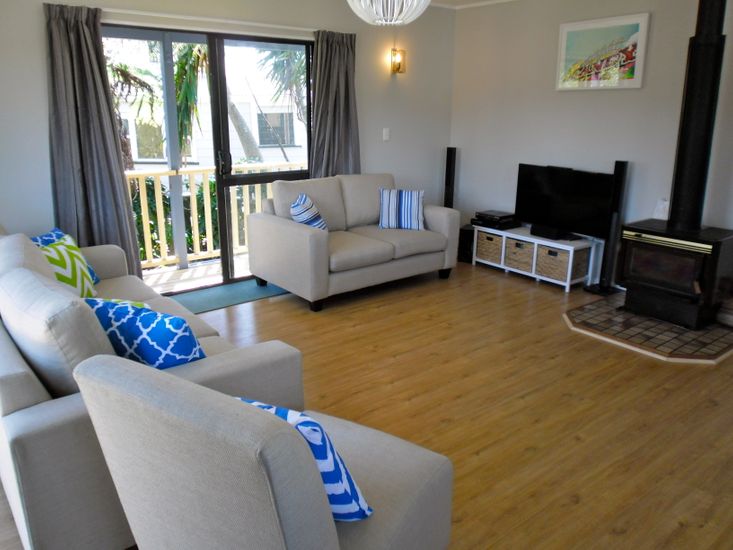 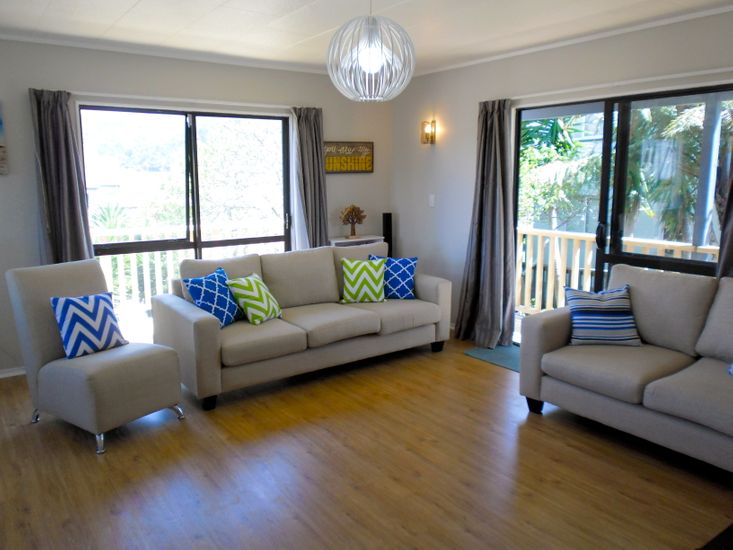 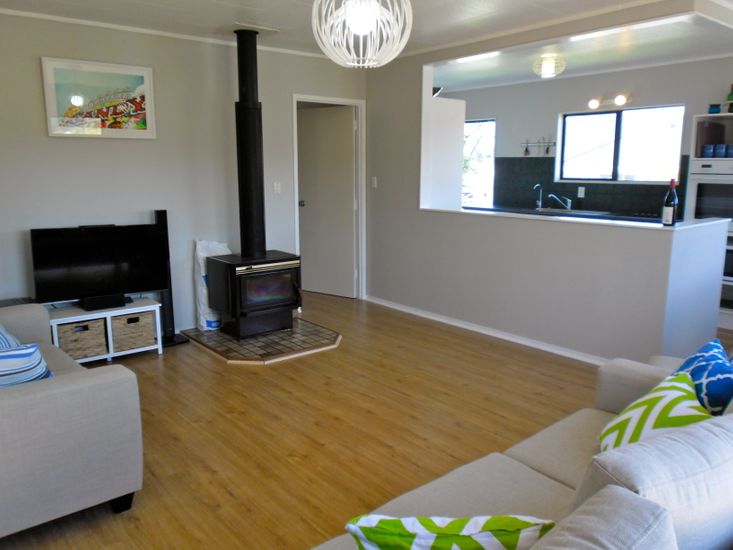 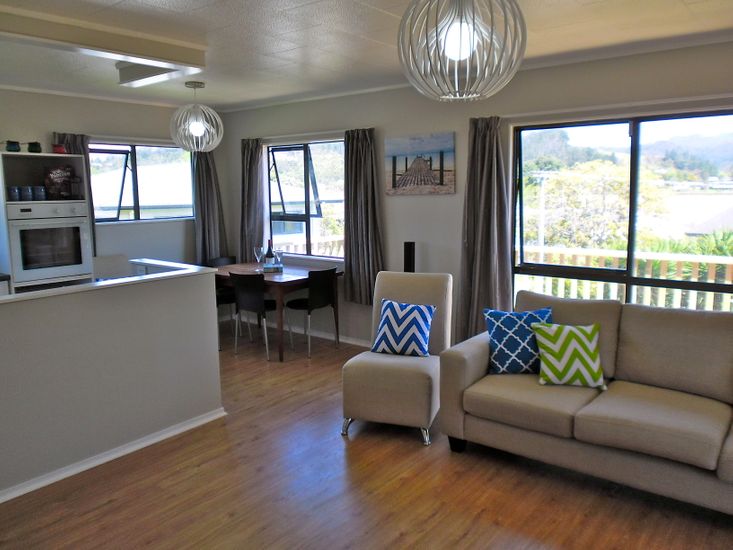 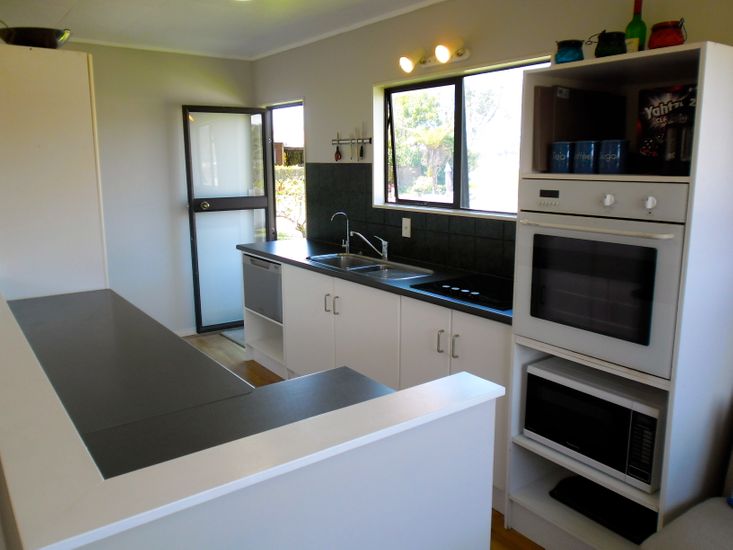 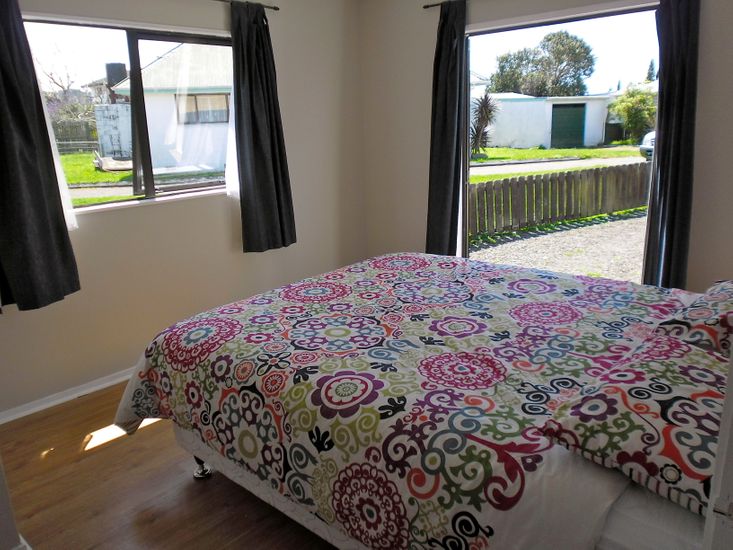 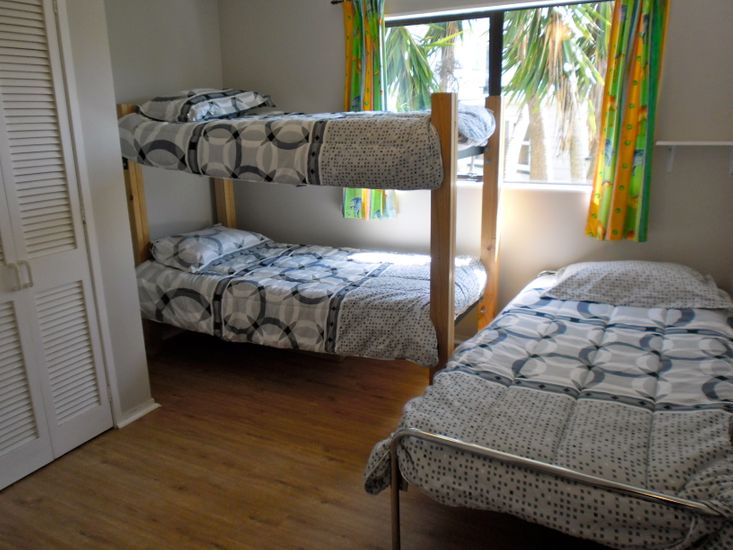 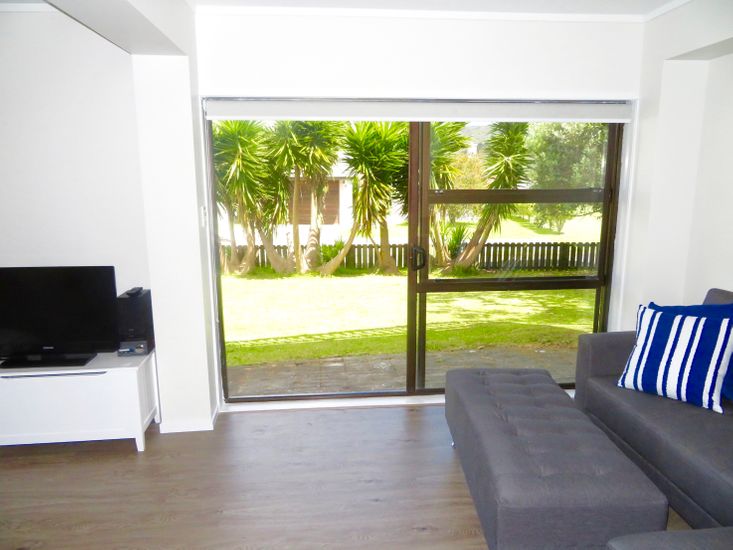 Lounge Downstairs - view to the lawn 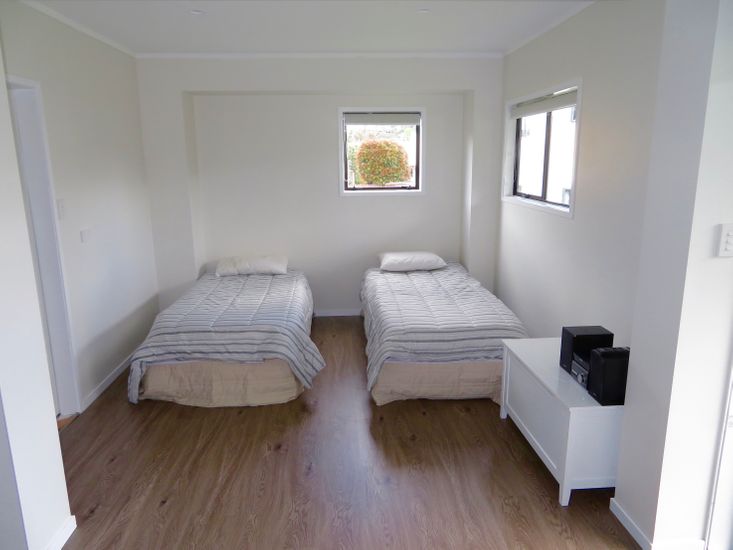 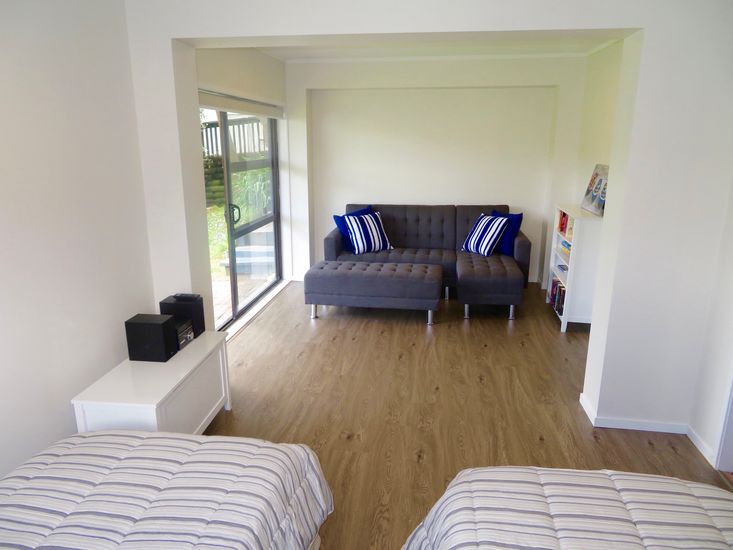 Relax in the downstairs lounge room - No internal access 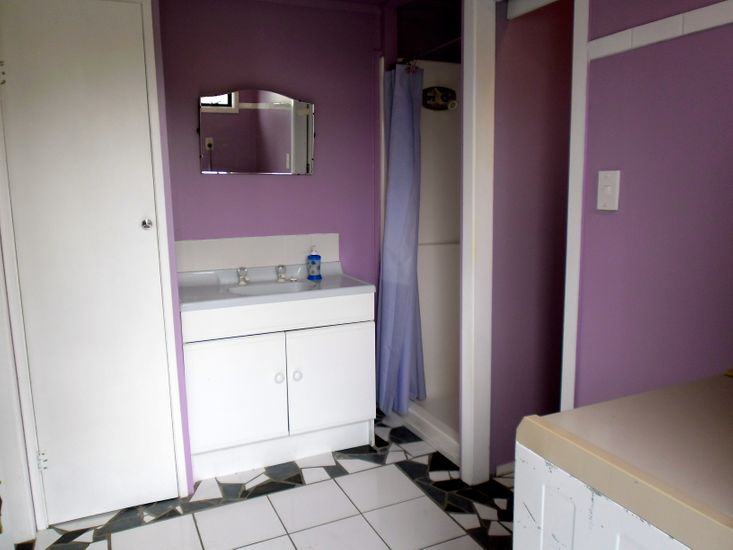 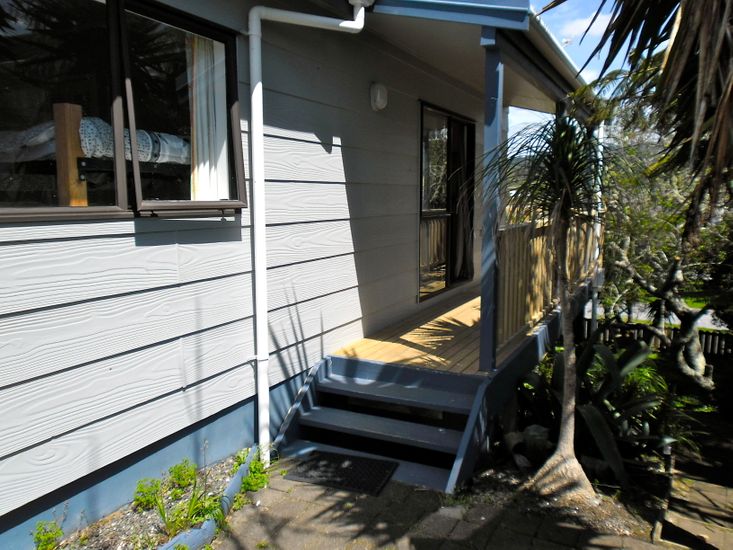 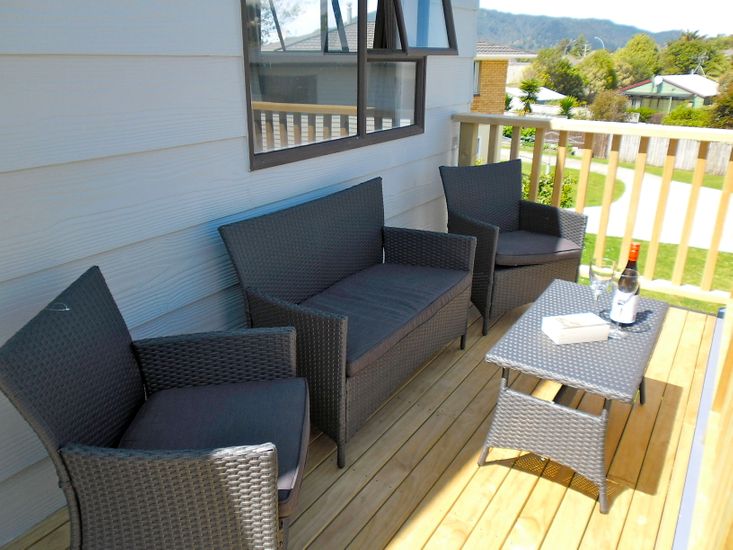 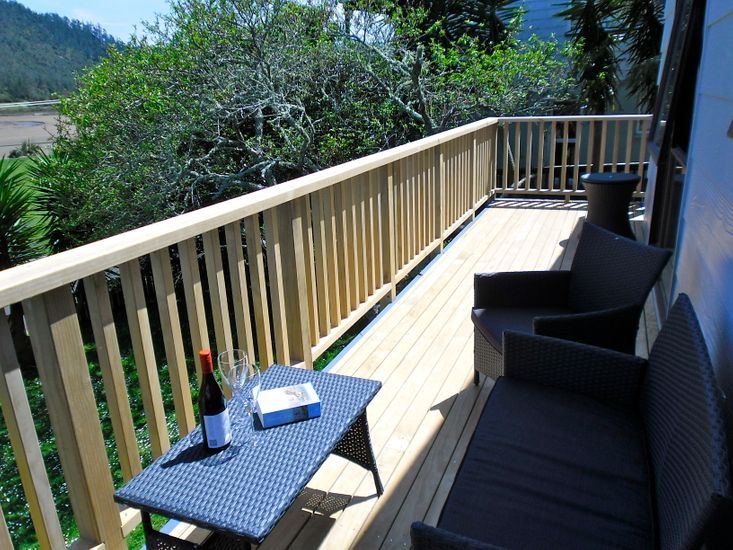 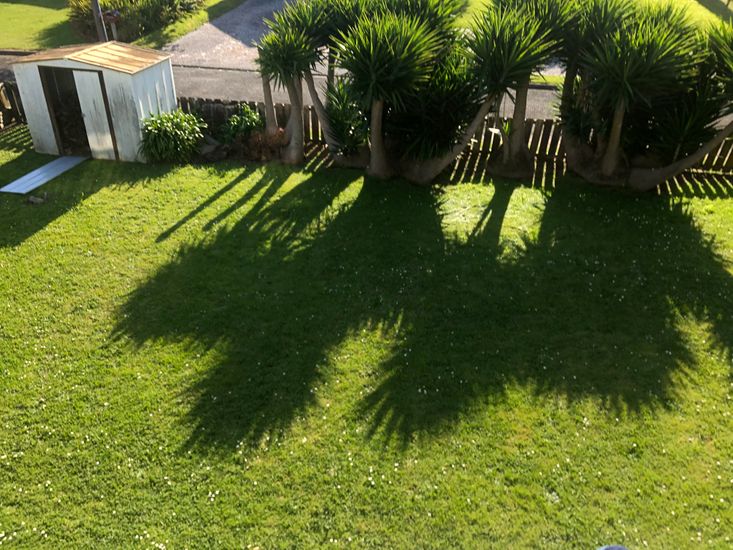 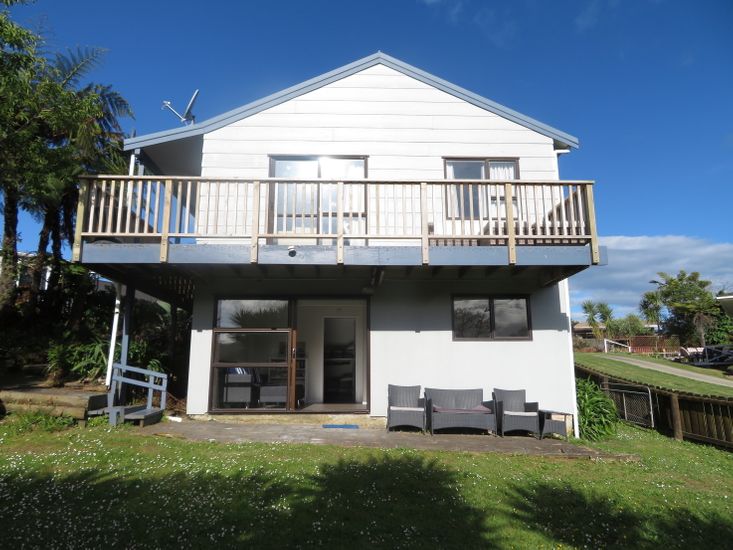 House from the lawn