Experience and escape to your own slice of paradise at this stunning Lake Rotoiti holiday home that is Lakefront Sublime! Elevated, spacious and offering some of the best scenery and views surrounding the lake, this is an ideal place for relaxation and comfort on a lake trip.

Spread across 2 storeys with a beautiful open plan living, dining and kitchen area, the beautiful lake views can be seen from most areas in the house. On warm summer days, open up the sliding french doors and head out onto the balcony to dine alfresco style.

Everything you need for a comfortable stay is on hand with heat pumps and fireplace to keep you warm, a TV and Wifi to keep you connected and entertained as well as a barbecue to use. Enjoy relaxed outdoor living with family and friends here and make the most of the access to the lake with a jetty available to use if you bring your boat and fishing rods.

Closeby, try your hand at golf at the Hinehopu golf course, stop by the Waitangi Soda Springs or venture out along a hiking trail to see a beautiful waterfall. Rotorua is less than half an hour away by car where you’ll find plenty of shops, cafes and restaurants.

Make the most of your trip to Lake Rotoiti right from the comfort and luxury of Lakefront Sublime!

As the property has unfenced access to the lake, adults are encouraged to closely supervise young children while outside to ensure they are safe around water.

The property is on a hot water cylinder, please be aware when house is fully occupied.

Please note that the master bedroom is connected to the second bedroom via the bathroom. There is a window between the bathroom and the main bedroom with a blind that can be shut for privacy.

The jetty is shared with the neighbouring property - if it is in use by another group, please use the left-hand side.

As the driveway is shared, please ensure you keep to the left.

The coffee machine is a percolator.

There is 1 electric blanket only.

Please note that the property is located on a main road. .

Please note that there is only intermittent mobile phone reception at this property due to the remote location. Spark seems to receive the best reception.

Can you hear the trucks, yes. Are the beds comfy, yep. Top it off with a private beach, jetty and a great sunset. Will be back.

Once again we've had another enjoyable stay at this property. Thanks for having us!

Such an awesome place to unwind. Everything was perfect! I can’t wait to go back!

Absolutely stunning property right on the water front. Ideal location and very spacious for family and friends. The property is well equipped and has absolutely everything you need to enjoy a holiday.

This property is lovely to swim out the front of and it’s very large. It suits our family of 6 adults and 4 children. 5 of the beds are however very uncomfortable and I would recommend bringing toppers for them if adults are sleeping on any of the single beds and one queen bed is also very uncomfortable. The upstairs bedroom has a sky light, we brought a black out blind for it as we knew it was there from last year. It has no cover so the light just comes in. This is our second year staying at this property and we enjoy this side of the lake and the size of the property suits us well!

Great house and location. We had a very enjoyable family weekend and it was great to have the boating facilities.

Always love coming to this home. We came here last year and fell in love with it. I knew to hire this amazing home again this year for my family when they came up for my wedding. It was their first time in Rotorua and what made their stay even more magical was staying at this home. The views were to die for, and their was so much space for my family. They even had a jetty at the house so it was super cool to park our boat up and take my family members around aswell. I think we might be making it a new tradition to try and stay here annually at this awesome home, and thank you again to the home owners who were ok with us having a few family members come around for a BBQ

Really enjoyed the location what a stunning location , would recommend to anyone , it was great for our group size We enjoyed the BBQ and the lakeside location 10/10 couple of issues with the automatic gate & Alarm but I'm sure now they know it will be fixed

This place is magic. Absolute lakefront, views from everywhere. We only stayed two days, and wished it was longer. This is an idyllic location, the lake, trees, bird life really take you somewhere special.

Lovely spot - so nice to eat breakfast down at the jetty. There is another property right there that shares it, but this was empty. House felt quite clean inside with exception of the windows and window tracks in the kitchen; however the outside had lots of spider webs (of which 3 large white tails found their way inside!) and felt like it needed a scrub up for the price paid. Note the 2nd bedroom on level 2 is through the master bedroom, and also shares the bathroom which has the open window through to the master as noted in another review. Absolutely fine for a couple, or if you had smaller children - however I wouldn't want anyone else sleeping there! The trucks going past aren't an earthquake either .. Overall it's a beautiful spot with spacious living areas, nice big kitchen with double dish drawer and scullery, quite well equipped. Agree with one of the other reviews that the glasses & plates would struggle to accomodate 10 people - we were 6 and wouldn't have wanted less. Open fire was really nice & cosy to sit in front of. Brilliant having 3 bathrooms no tripping over anyone else! and a separate laundry, also there's a really big internal access garage.

Thank you for your review, Ross! We're glad you thoroughly enjoyed your stay at Lakefront Sublime! We've now made the connection between the master and the second room clearer on the listing. We've also taken your feedback on board regarding exterior cleaning and will get onto this, as well as the windows and tracks which we do address on our deep cleans. We hope to see you again in the future.

Great place right on the Lake with wonderful views. Very suitable for 3 couples with 3 double bedrooms all with bathrooms. Also suitable for large families as there are additional 4 single beds and large well equipped kitchen.

Awesome spot, great house with plenty of room for all and great little beach and jetty to have your boat and jet ski on would definitely stay again.

Such an amazing home!!! Situated right on the lake, really spacious and perfect for family and friends gathering. We loved the house and its a perfect get away from they busy city life. We loved this home so much, and will be booking this lovely home again in the future

An amazing house in a fantastic location. Heaps of space for large families, and room for kids to play on the lawn and little beach which was a bonus. We had a wonderful holiday and hope to be back again!

My whanau really enjoyed our stay here. The privacy, and space was awesome and we really enjoyed those great views overlooking Lake Rotoiti. I’ll come and revisit this place again.

The property was at a world class location, absolute lake front. Brilliant family kitchen and enough space for 2 families. It is on a main road so there is quite bit of road noise. It wasnt clean, the window sills were full of bugs and there was a note about this in the guest book too, the chopping board had mould growing on it.

Thanks for your review Megan. We are happy to hear you loved the location! We pride ourselves on our properties being sparkling clean, and we're sorry your experience did not meet our usual high standards.

This is a great place to stay fantastic position on the lake big lounge kitchen and decks. Secure fenced property for boats and jet skis will definitely stay again.

We were three couples who hired the house together and it was perfect! It is such a beautiful spot and we were lucky with perfect weather. We had our boat tied to the jetty during our stay and the lake was excellent for our water sports. Would highly recommend and would happily stay again!

Most amazing and wonderful place! Well equipped, cozy and warm and plenty of room for all. look out for ice on the jetty in winter.

Beautiful lakefront view. We shared the property with another family and it catered for 10 people. We stayed upstairs, the main bedroom upstairs is not fully private! No door to fully close the bedroom. And the bathroom is connected to the bedroom with a window with no glass above the bed and it is only covered by a blind, it’s also very close to the toilet! You can hear everything if your in bed! Not very relaxing! We ran out of hot water the very next day. I don't think it caters for 10 people. Dirt was coming out of the shower, maybe it was not clean, and also the bath when the spa was turned on! Although the cleaning fee was not optional but included with payment. Well equipped big kitchen, but fell short on plates. It was nice having the oven and gas stove.

Hi Zainab - our Holiday Manager has confirmed there is a door to the upstairs bedroom and that because the property is on a hot water cylinder the hot water can run out with extended use - we have updated the listing to reflect this thank you. We have not noticed dirty water coming out of the taps before, however our Holiday Manager will keep an eye on this. The window in the ensuite allows you to see the beautiful view of the lake and lets lots of light into the bathroom which we think is lovely! The blind you mentioned can be shut for privacy in the bathroom from the master bedroom. We're glad to hear you had a great time at Lakefront Sublime otherwise. How beautiful is that view and I'm sure your family loved the proximity to the lake!

Great spot, well located for walks, golf, biking, boating and simply relaxing on the deck. House was just like home away from home - only with a fabulous view :-) Would definitely stay again

Lovely location, plenty of space and well appointed kitchen. Had to clean bathrooms and vacuum throughout on arrival which was disappointing as there there is a charge for a professional clean!

Hi Karen, thank you so much for your feedback and we are glad that you enjoyed the lovely location. We are sorry to hear that the cleaning was not up to Bachcare standard and will ensure that it is better going forward.

Awesome place to stay in lake Rotoiti. Everything you need is here and much more. Heaps of room for all. And so good having own jetty. 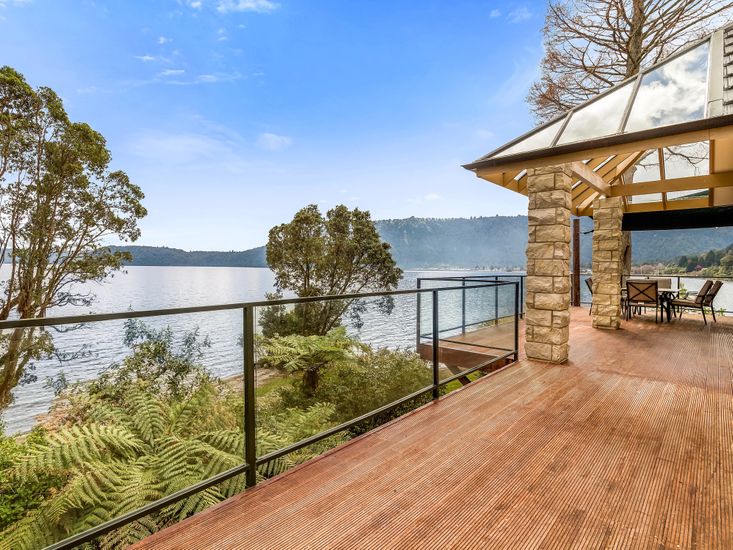 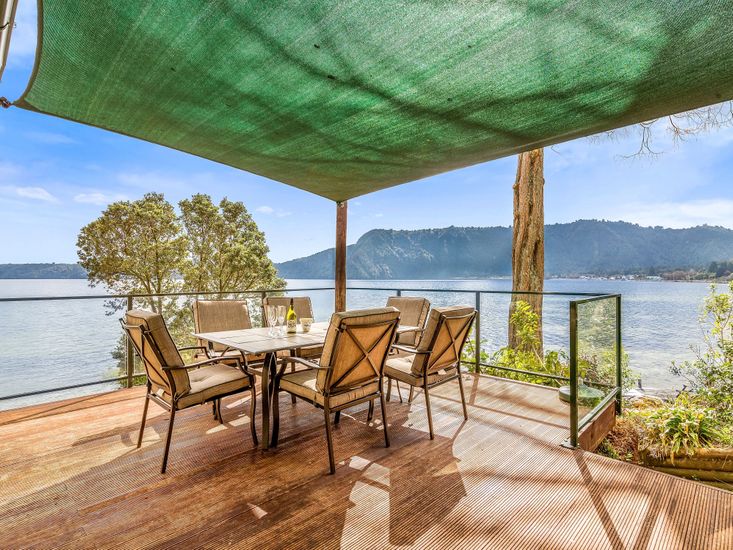 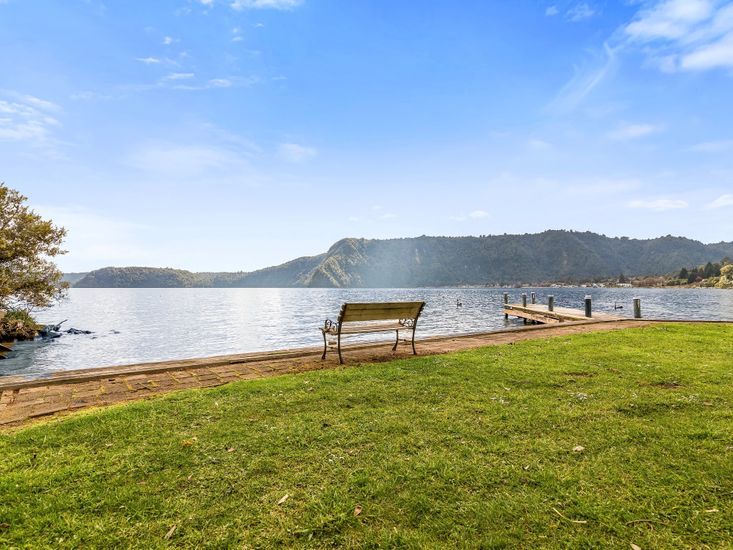 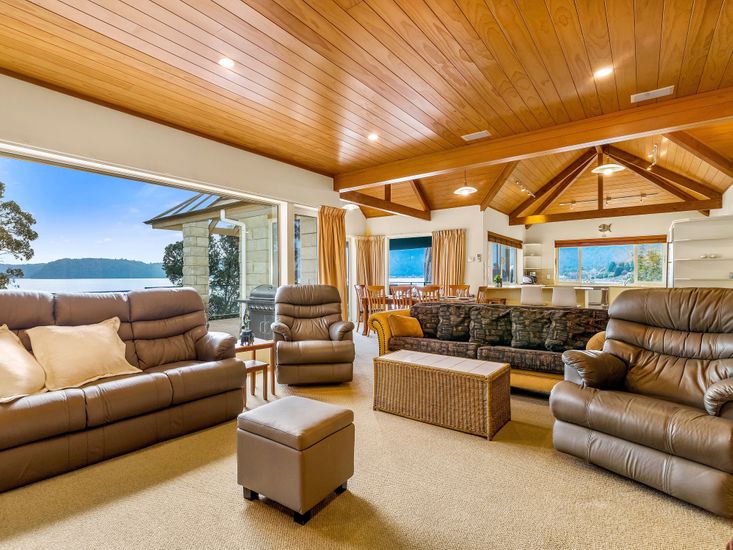 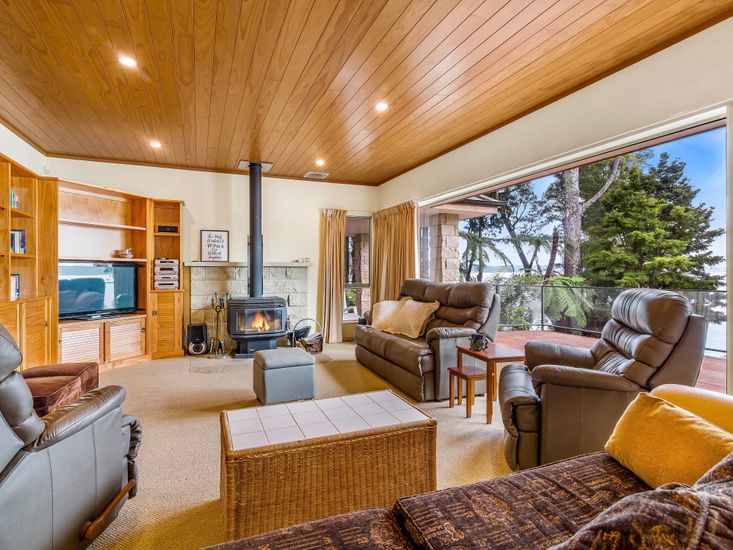 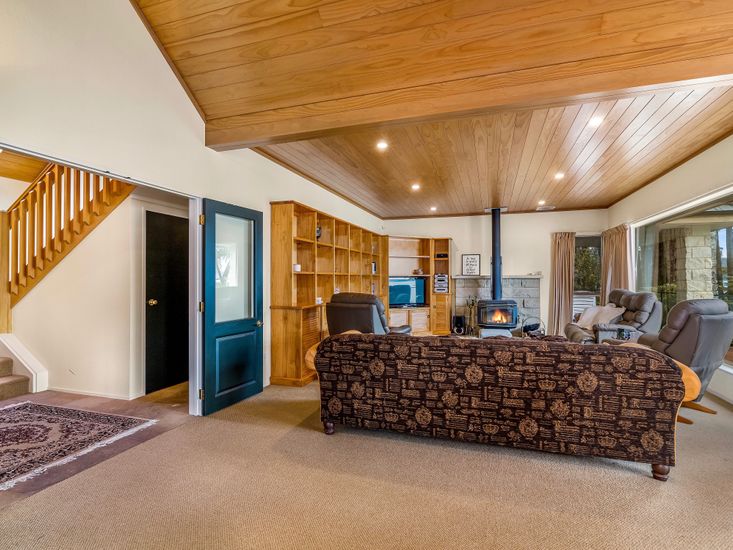 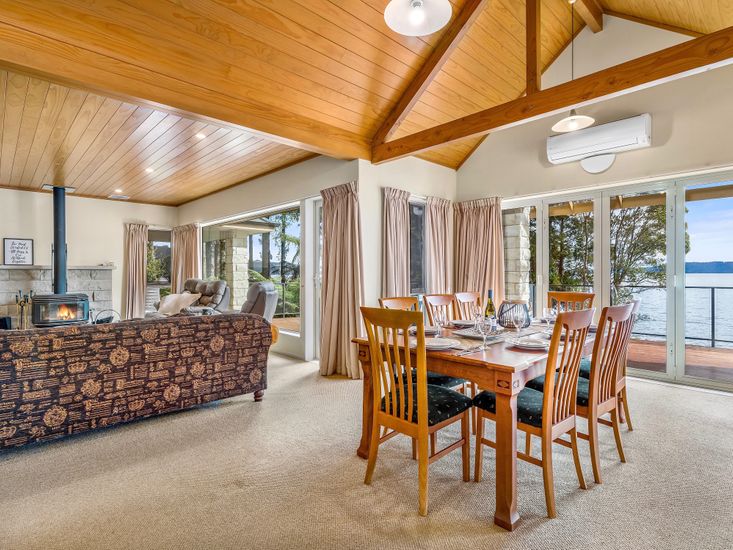 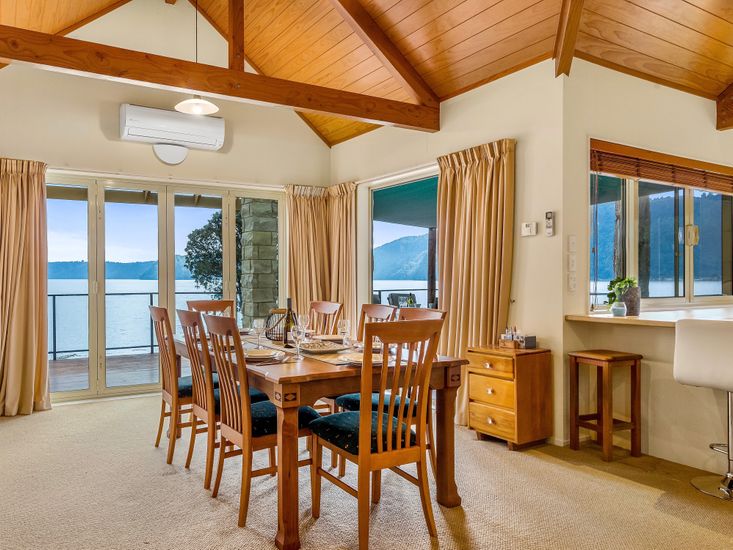 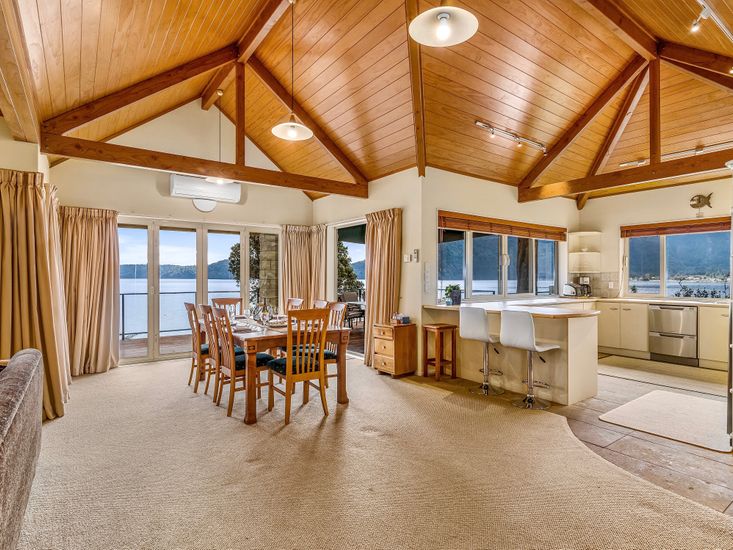 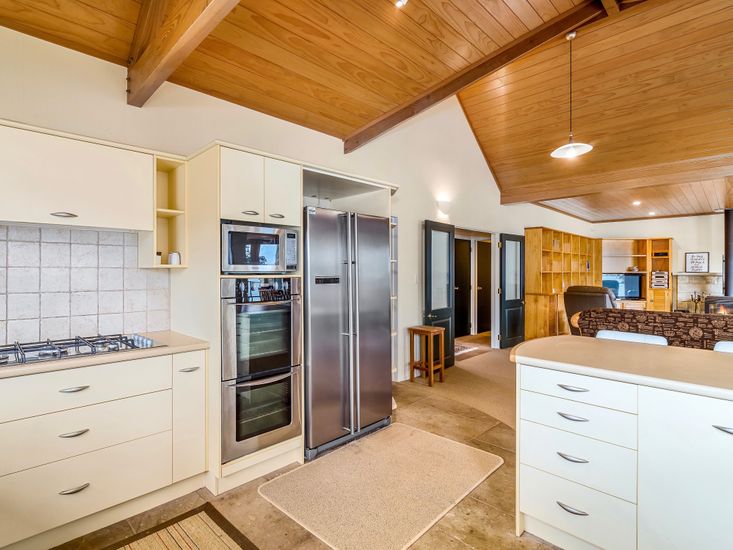 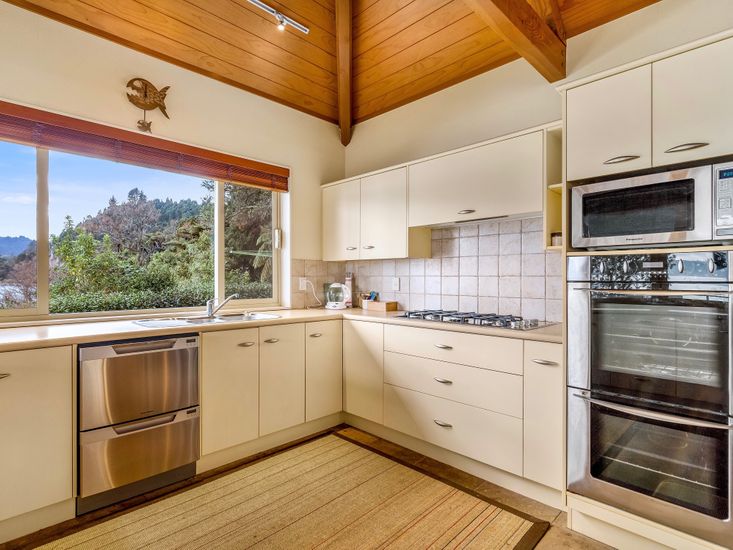 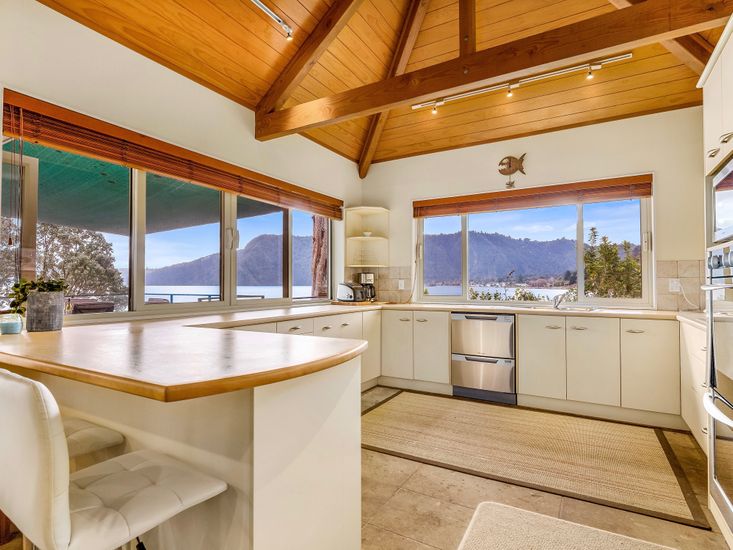 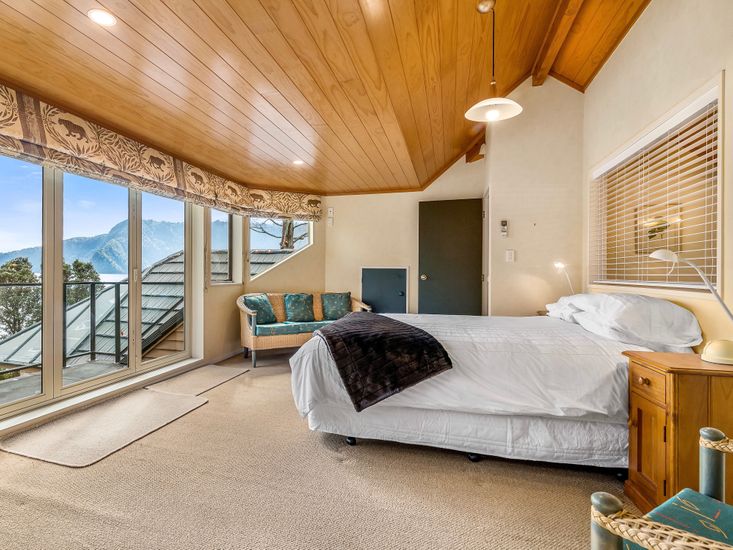 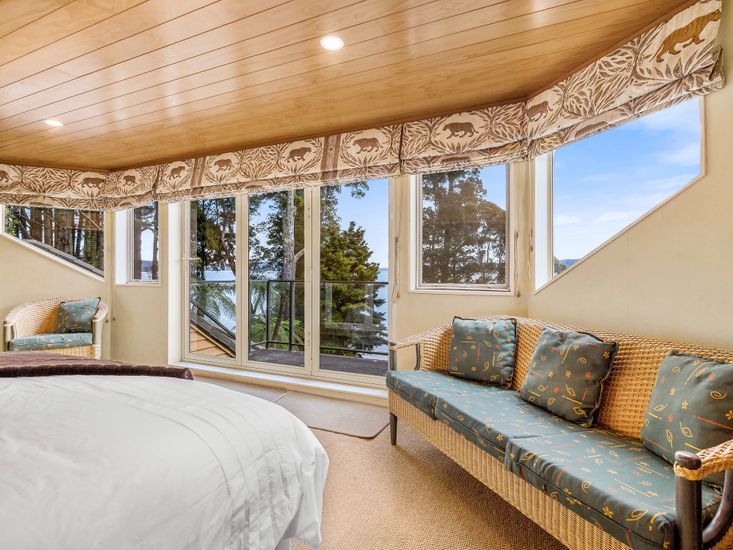 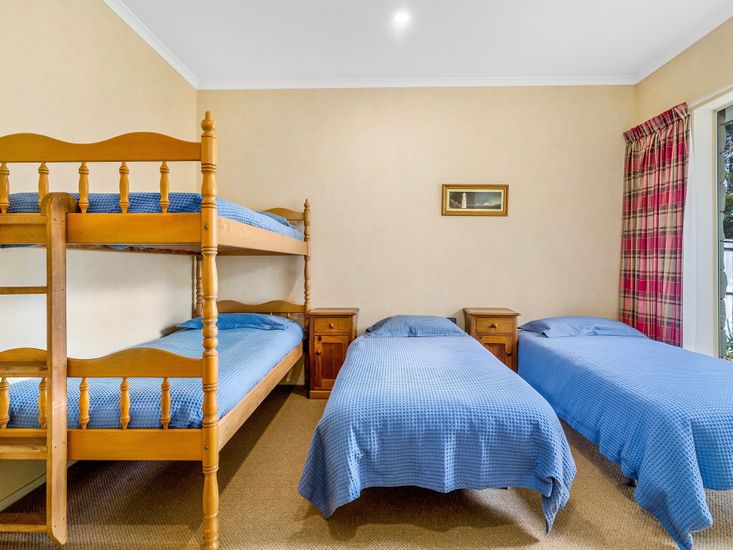 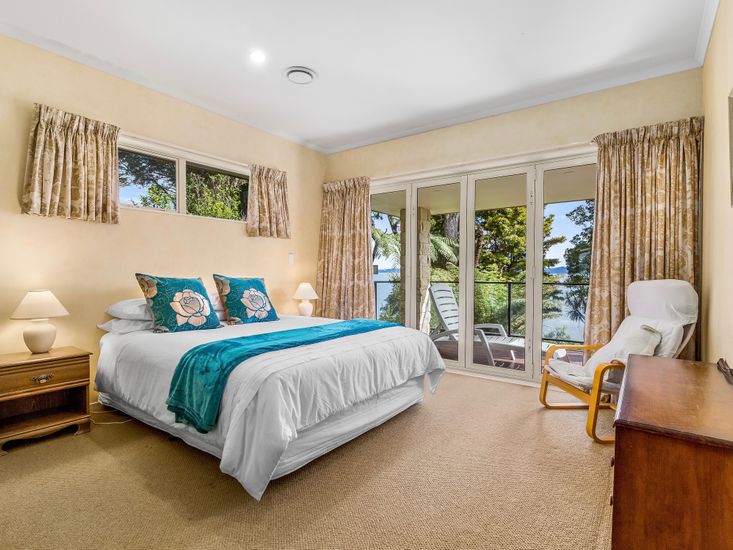 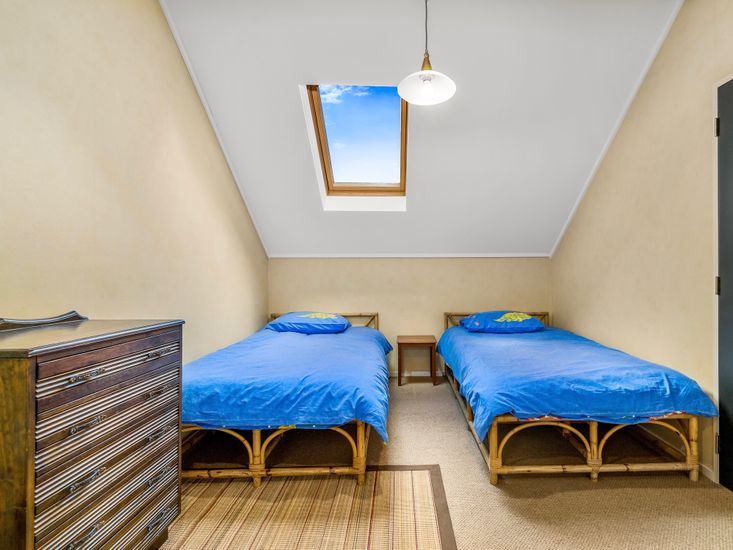 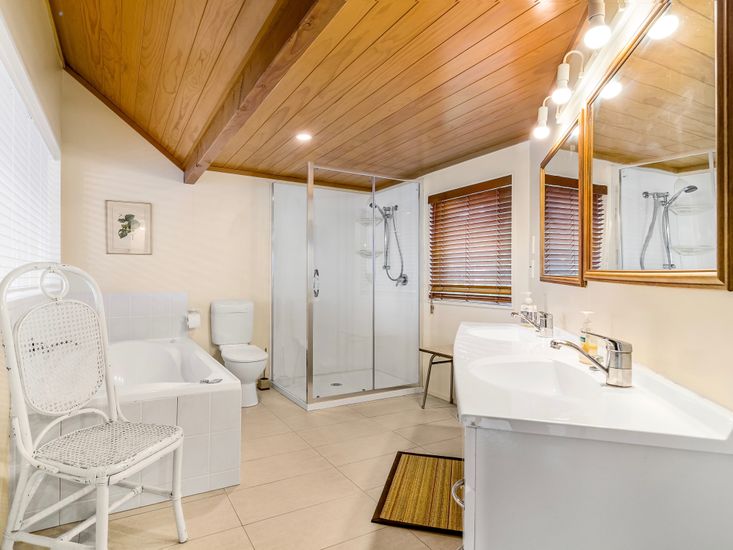 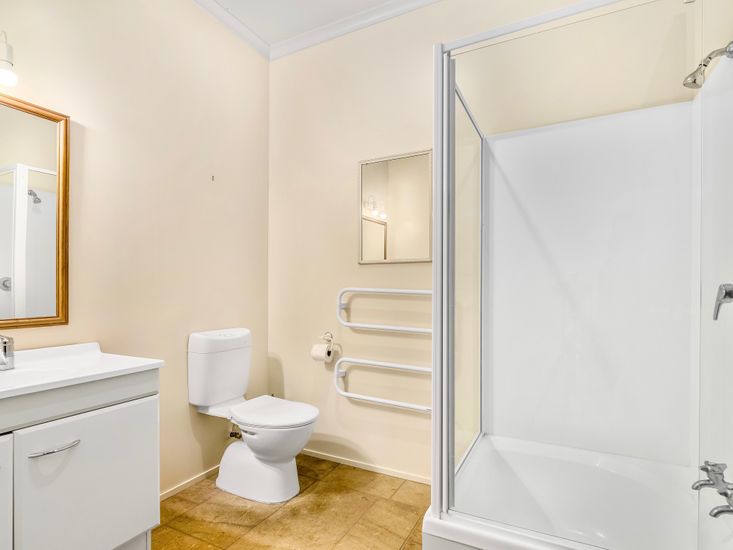 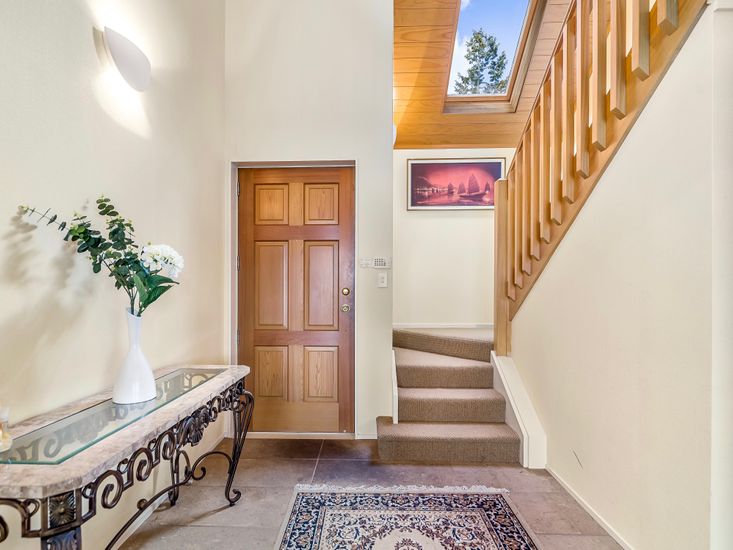 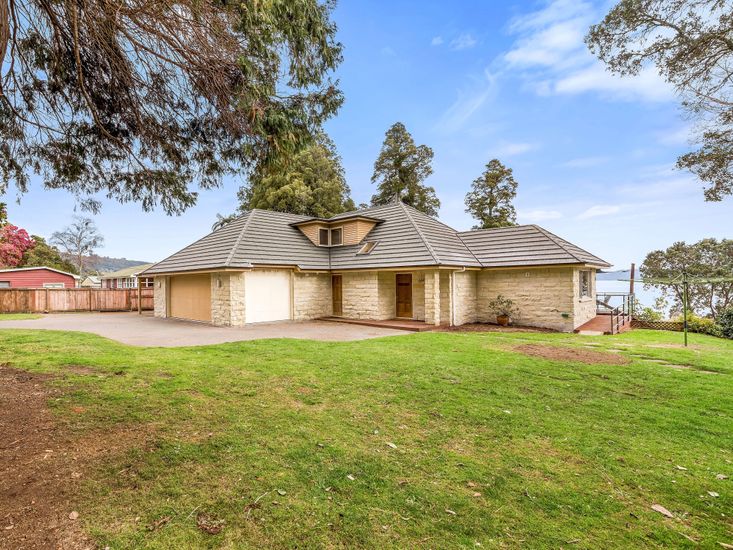 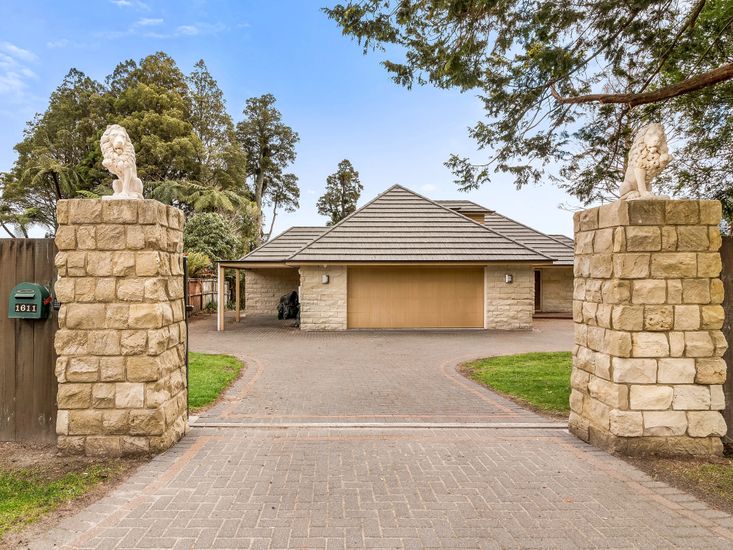 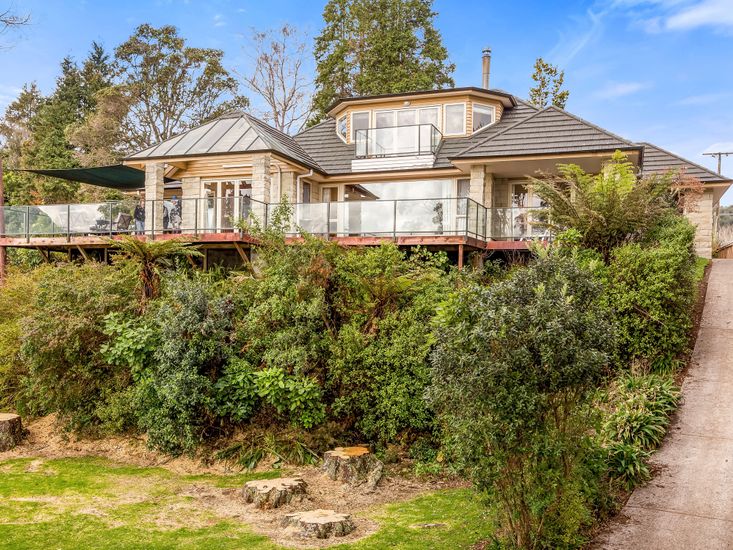 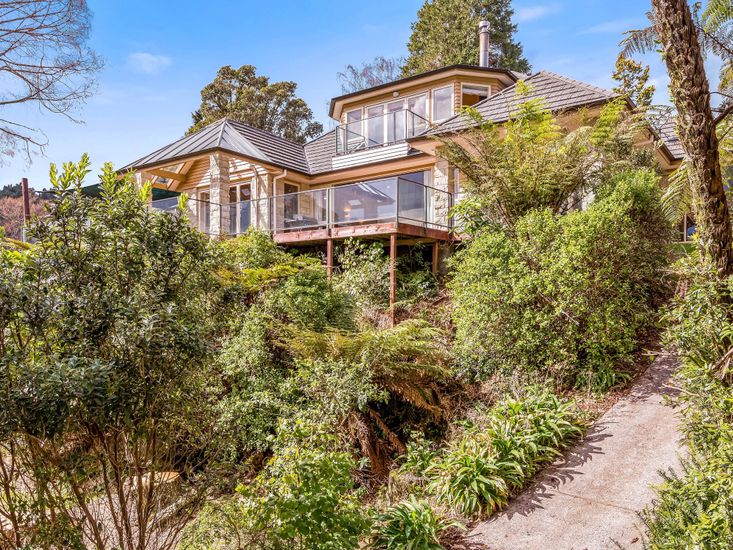 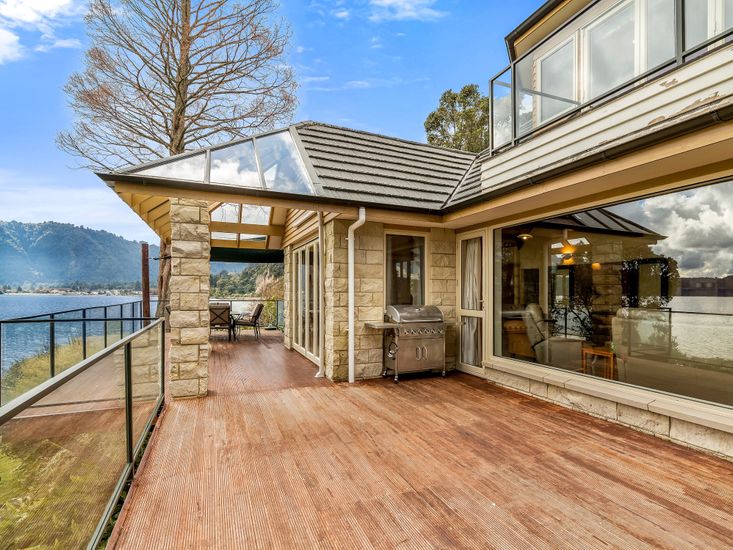 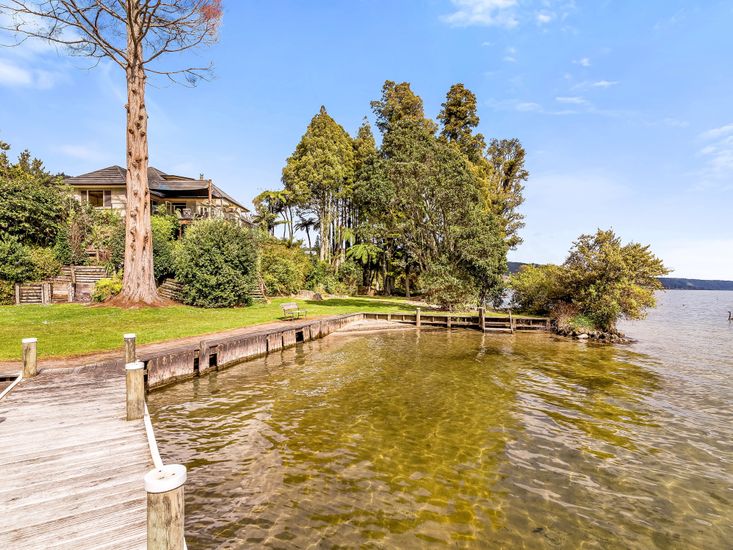 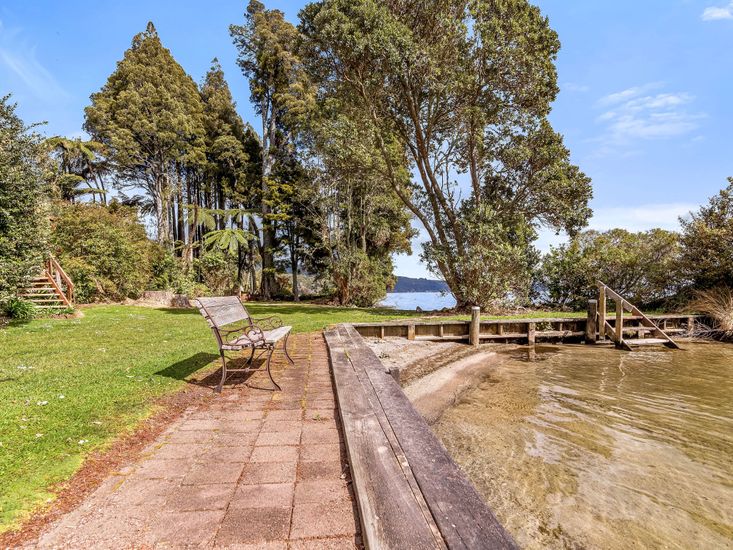 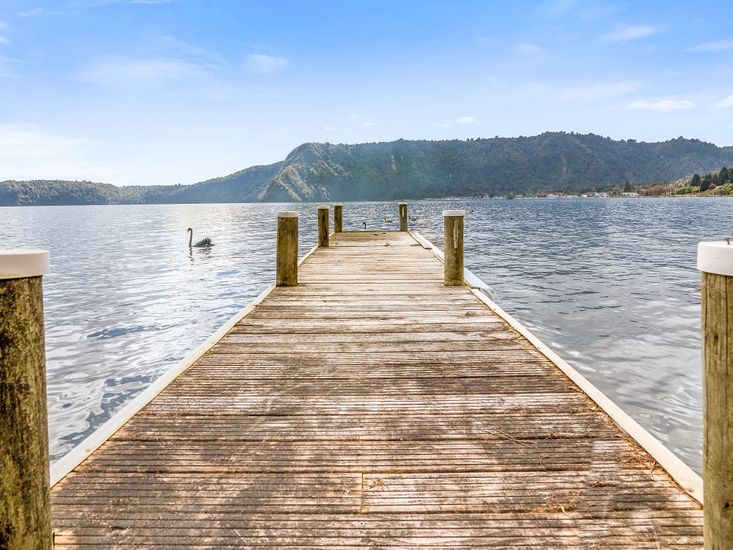 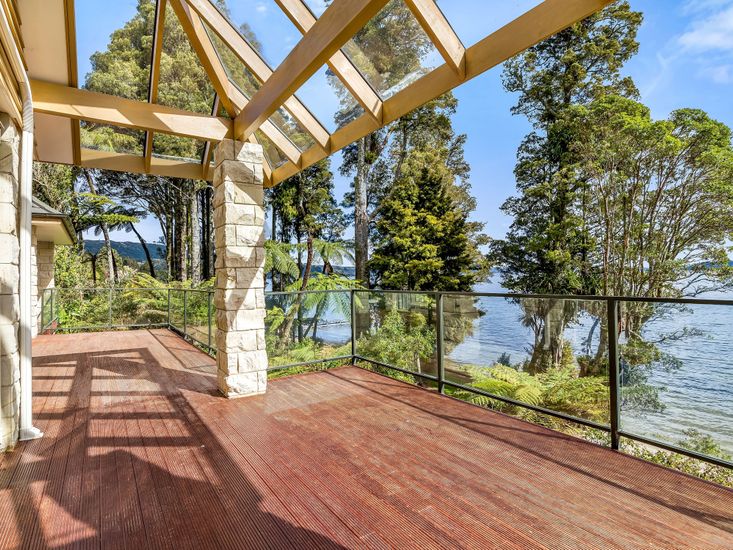